Great Pumpkin Race and Biggest Fireworks ever at the track!

20oct5:00 PM8:00 PMFeaturedGreat Pumpkin Race and Biggest Fireworks ever at the track!

All classes will be racing! Crash to pass, roadrunners, modified's, hornet cars, bomber's, MadMax extreme racing And kids in costume will enter the 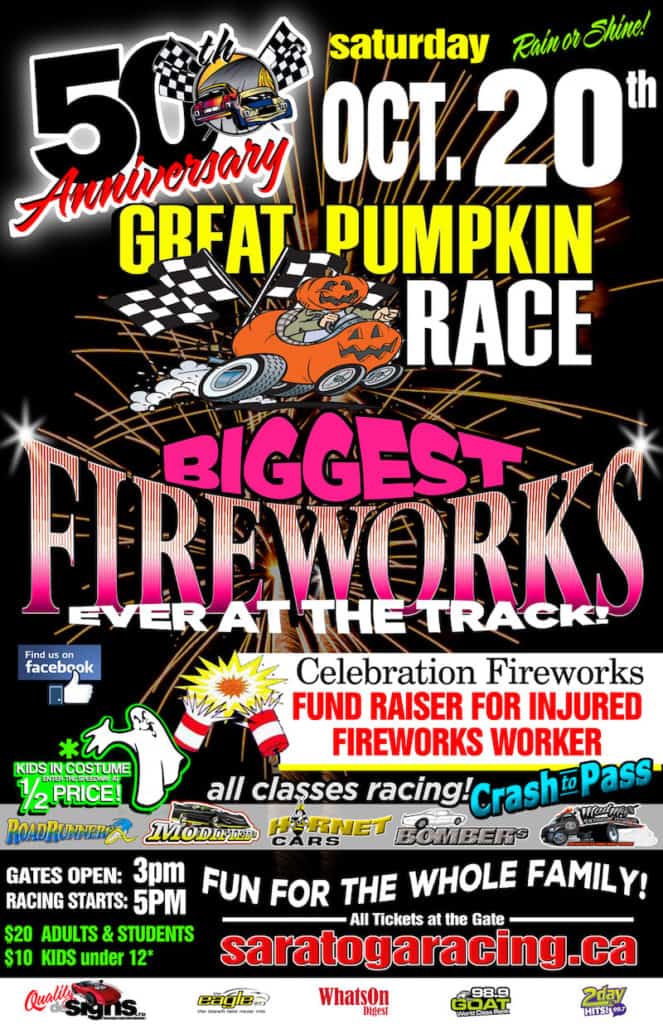 And kids in costume will enter the speedway at 1/2 price! Come and have fun with us.

There will be the biggest celebration fireworks ever. This race is a fund raiser for Jonathan, the injured fireworks worker.

Seven point champions were crowned on Saturday September 29th at Saratoga Speedway as the 2018 points series came to a end in the 50th season for the Black Creek oval.

The Kyte Delivery sponsored night of racing was to be the last of the season the speedway has now scheduled a rain or shine night of racing, the great pumpkin race  and a fireworks show to officially end the season on October 20.

The event will serve as a fundraiser for Jonathan Sedman the fireworks worker who was badly injured on the 29th. The speedway has decided that they will donate the net proceeds from the nights racing which is open to all classes and from any outside track. To honour his fallen son Sedman’s dad will be on hand to help set off the fireworks his son set up.

The special event has a special start time as gates will be open at 3 and racing at 5 and any child wearing their Halloween  costume  will get in for half price.

After a season high 88 cars qualified 12 heat races led off the night with race wins going to Chris Hleck, Rider Lipkovists and Laidlaw in Hornet A in Hornet A wins went to Neufeld and Evin Mcluckie with Damon Dunn winning the Mad Max win. Austin Klee’s 2nd night racing a Road Runner saw him win his first race in the 8 lap race followed by race wins for Sheldon Hopp and Chris Campbell in Crash to Pass races while Larsen would come away with the Bomber race win and Don Hallgarth in the Modifde race.

The end of the 5 month season prepared the drivers for the last race of 2018 and the racing saw some tight competitive action with some of the best racing of the season. Three Hornet main events finished their season with wins going to Chris Hleck, Laidlaw in the B’s with Micheal White taking the A class main. Josh Taks finished his championship season off with the final main event win in Road Runners while Larsen did the same in the Bomber class.  Dunn took the win in a exciting Mad Max main while Hopp made his return to Crash to Pass racing a winning one a he matched his heat race win to finish off the season with the win in the  last race of the night.

Sorry, the comment form is closed at this time.